Products and Teams that Work 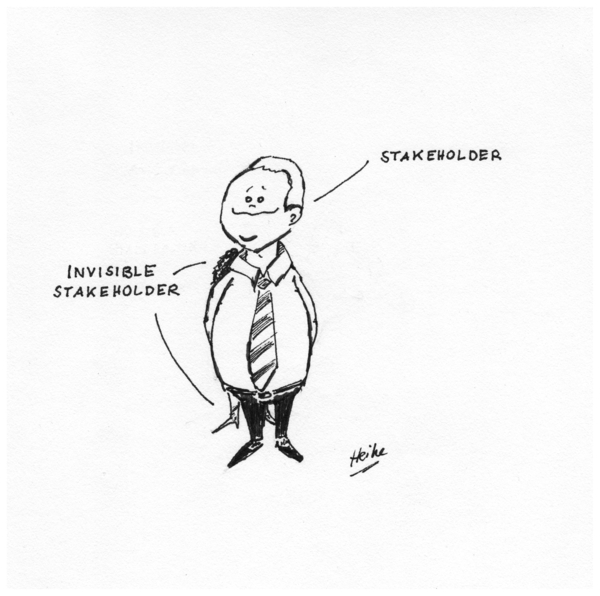 A Look at Invisible Stakeholders

Stakeholder management is a minefield, demanding of the product manager/owner the diplomatic skills of a French courtier combined with the patience of a stylite. The task can be made easier by identifying invisible stakeholders and making them visible.

The standard stakeholder grid has trajectories of 'power' and 'influence'. However, these terms are closely associated to position and money: who has power and influence? Clients, of course. The CEO. The Product Director. The Sales Department. The financiers.

This kind of money-and-organisational-chart based thinking can obscure some important stakeholders. This is because power and influence are anarchic things. They aren't always what we think and we find them in odd places.

To be blunt, departments up and down the nation are headed by executives who are like the proverbial dog being wagged by the tail (their teams). This is healthy: a good leader will be attentive to staff needs and act as an enabler and facilitator. It also means that people with true power and influence are often less visible. I suggest you are attentive to the presence of these very people: invisible, or off-grid, stakeholders.

You think it wise to keep executives closely involved to keep your project on track? True, but I once found a most influential and powerful invisible stakeholder to be a lady doing part-time data entry on a business-facing application my team was upgrading. Working in relative obscurity, she threw many a spanner into the works, using her boss as a mouthpiece.

I'll take her as an example to look at how power and influence might be disguised. Let's call the lady Anne:

Did Anne appear on any of the 'official' stakeholder grids that slumbered on Confluence? Of course not. Was Anne heard? You bet. Her boss, just like wise bosses everywhere, relied on Anne and represented her point of view.

But because her boss didn't possess Anne's battle-hardened insights and passed on second-hand opinions, watered down, devoid of their original sharpness and often very late, we wasted time and energy.

People at Anne's level simply didn't make it onto The Official Stakeholder Grid. We managed Anne's boss as a 'powerful' and 'influential' stakeholder while all along it was Anne we should have engaged with.

Many stakeholders are obvious: clients, power users, purse-string holders ... but in order to identify more valuable stakeholders ask yourself:


Some of these questions are unorthodox. Some are not easy to answer. But identifying invisible, off-grid stakeholders and actively managing them can truly energise your project.

Being a humanities graduate in charge of digital goings-on can…

Stakeholder Management for the Ruthless

Continuing from what turned out to be Part 1 of…

A Look at Invisible Stakeholders

Stakeholder management is a minefield, demanding of the product manager/owner…

This is to ensure that experience using the website is the best possible. You can find out more about the cookies we use by reading our cookie declaration.

What are cookies?
Cookies are small files stored in your web browser to help the website interact with you. Without cookies, every time you visit a new page the website thinks you are a new visitor. This would mean for example shopping baskets would empty each time you clicked onto a new page. If you would like to read more about cookies , Wikipedia has a detailed article.

What if I do not want cookies stored on my browser?
You can block cookies via your web browser. You can find out specific instructions for your browser via Google. Please note though we provide no guarantee against unexpected results should you choose to block cookies on this website.